Focus on ToTAT and fast transport of blood samples between the departments and the laboratory has reduced response time to maximum one hour at hospital Sønderjylland. 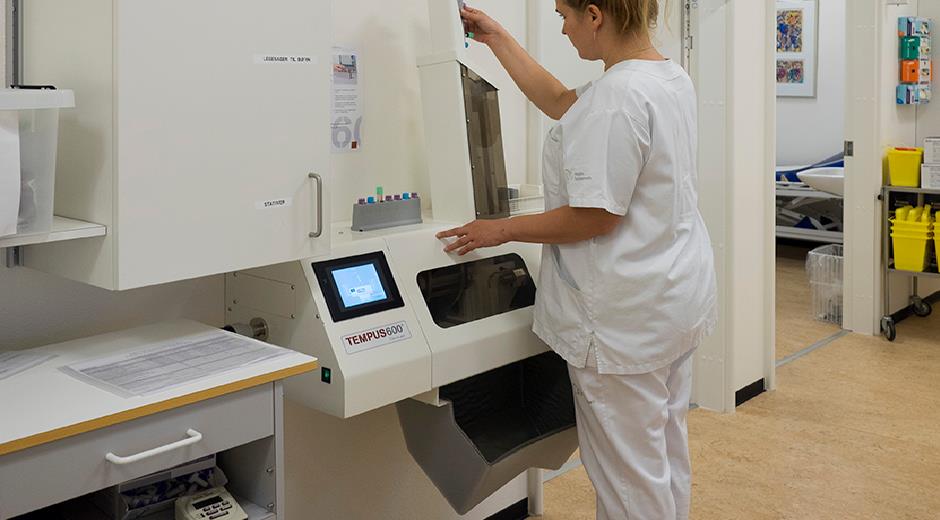 In 2014, three hospitals merged to form Hospital Sønderjylland, and the Emergency Department for all three hospitals was centralized in Aabenraa. This put new demands on the hospital as the number of patients increased and faster turn-around-times (TAT) on results of blood samples were needed. The ambition was to reduce response time to maximum one hour.

Fast transport of blood samples from the departments to the laboratory is a key factor in keeping ToTAT short. This challenge is overcome by using a dedicated and automatic system for transporting blood samples and connecting the departments directly with the laboratory. The Tempus600 pipeline system delivers the blood samples directly in the laboratory in an even flow from the departments, which eliminates manual handling of samples, ensures an even treatment of the samples, and frees up resources for patient care: “Previously, the staff walked from point A to B with the samples and there was a lot of manual handling in the process too. Now staff is released from repetitive work that wear down the body and they can stay on the departments taking care of the patients instead,” Ms. Susan Boye Nørregaard, Head of the Biochemistry and Immunological Department in Aabenraa explains.

The whole process - from taking the samples to delivering the analysis results - is fully automated, monitored, and IT-supported to ensure that the ToTAT does not exceed one hour.

Since the merge of Hospital Sønderjylland, the Biochemistry and Immunological Department in Aabenraa has experienced a 13 pct. increase in patient contacts, but with the focus on the ToTAT, the hospital has managed to reduce the average duration of hospital admittance in the Emergency Department.

In 2020, the new Hospital Sønderjylland is established with an emergency hospital in Aabenraa, a specialized hospital in Sønderborg, and an outpatient clinic in Tønder. To be able to meet the future demand of handling an increasing amount of blood samples and to ensure rapid response time, the hospital plans to implement additional Tempus600 systems.