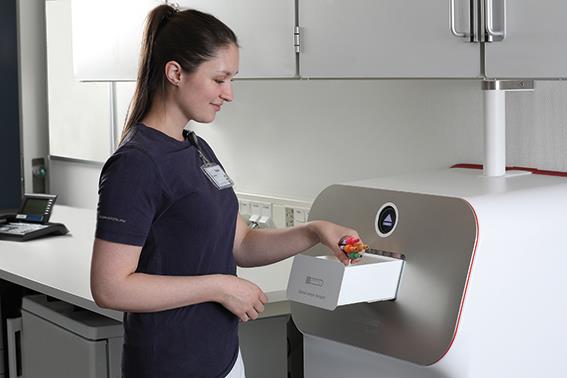 Hjørring Regional Hospital is already an experienced user of the Tempus600 system. The hospital implemented its first Tempus600 TA in 2013 in the Emergency Room. Since then, four Tempus600 TA and three Tempus600 Vita systems have been installed at different locations in the hospital.

“Our aim is to improve and optimise the treatment of particular groups of patients, for example diabetes patients who must be checked every three months,” says Inga Damsgaard, Clinical Biochemist, Hjørring Regional Hospital. “With regards to patients called in for surgery we want to draw the blood samples on the day of the actual surgery. This means we can ensure that the test results are as recent as possible and patients no longer have to come to the hospital twice; the patients simply arrive 90 minutes for blood sampling, prior to surgery. This means we help patients to save time and Tempus is one of the ways that we can help them,” explains Inga Damsgaard.

Hospital staff are very positive about the Tempus600 system. They find the new Quantit is easy to use and fully meets requirements in phlebotomy. It makes sense that you only have to place a handful of samples in the system, push the button and the samples are immediately transferred to the laboratory.

"It is more efficient to use the Tempus600 system instead of walking the samples from A to B. When the samples are moved manually, they are collected and carried to the laboratory once every hour. Using the Tempus600 system, samples are placed in the Quantit sending station right after the blood sampling, and they are transferred instantly to the laboratory within a few seconds,” says Inga Damsgaard.

Collecting the samples was previously a manual procedure, but after the implementation of the Tempus600 systems, the laboratory receives the blood samples one-by-one in an even flow, which evens out the peak hours, resulting in a more balanced production of blood samples.

“Using the Tempus600 systems we have succeeded in significantly reducing the total turnaround time and improving the response time for blood samples. Overall, it is a major plus in the initiatives we have carried out in order to bring down the response time,” says Inge Damsgaard.