On the 19th of Juli 2016, approximately five years after launching Tempus600 in the Outpatient Clinic at Odense University Hospital, came the day when 1. million samples had been send by this system to the laboratory. This installation was the second installation in Denmark at the time. 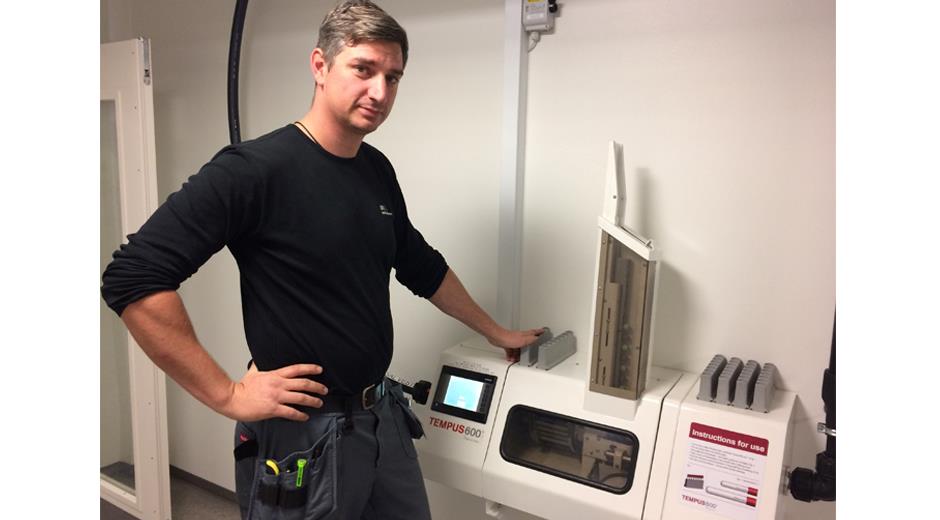 Quality and reliability
Esben Hansen, electrical engineer at OUH Facility Management in charge of service and maintenance of the traditional pneumatic system and also the new Tempus600 transport system, is enthusiastic about the stability and quality of Tempus600 systems. “At OUH we maintain Tempus600 systems which is a very easy task and an economic solution for us. After implementation of the first Tempus600 all the systems have worked perfectly and there is very little maintenance on the systems. Tempus600 is a quality product and there are hardly any faulty parts. Every second month we maintain the systems and change spare parts if necessary which takes only 40-50 minutes per system”.

Esben Hansen is impressed about the reliability of the system and the high up-time of 99.8 % which ensures rapid transport of blood samples from A to B. This gives an even flow and prevents peaking when samples are received in the laboratory. “9 out of 10 times when we experience problems with Tempus600 it is due to user errors. Then it is easy for us to trace the person who has send the sample and tell him how to do it right next time”.

More Tempus600 to come
As part of Odense University Hospital automation strategy further installation of five Tempus600 Vita started up in august 2016. These installations will connect the laboratory with heart medical ward, hematological ward and oncological ward in order to give faster responses to blood tests than it is possible today. This means that the blood samples will no longer be delivered personally in the laboratory, but instead they will be send directly to the laboratory with Tempus600 Vita. Another Tempus600 sending station will be installed at clinical immunological ward, in order to give faster responses to blood typing and other analysis in the future.
Blood samples and analysis is an essential tool for diagnostic and treatment in a hospital. Rapid response time means faster treatment. In the health care system time is an extremely important factor and faster treatment has great influence on the patient’s ability to recover from illness.