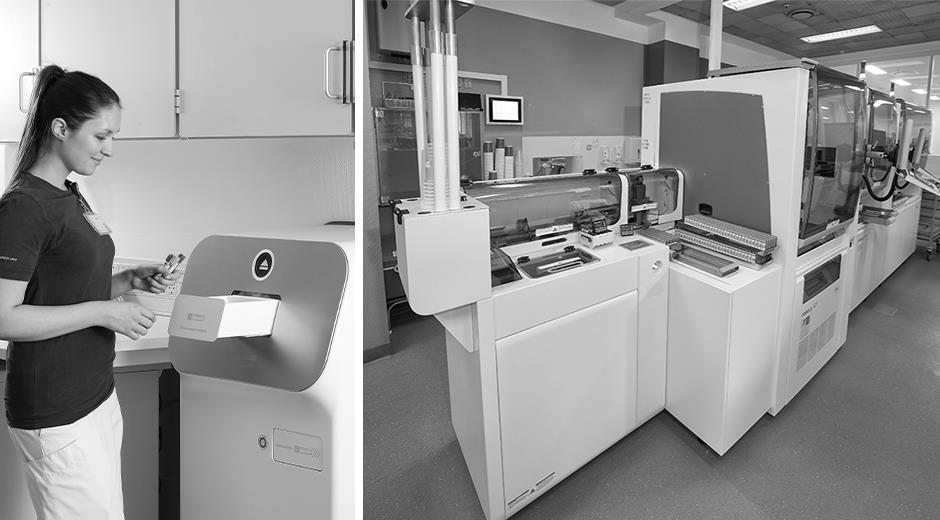 Amager and Hvidovre Hospital, are two acute hospitals in the Capital Region of Denmark. They deal with the largest number of births in the region, with almost 7,500 births yearly between them. In 2020, the Clinical Biochemical Department had 1.2 million patient contacts and produced 13 million patient results. On average, 2-4 blood samples were drawn per patient.

In 2013, with the aim of reducing the turnaround time for blood samples and improve patient treatment, the hospital management decided to install Tempus600® at Hvidovre Hospital, thus making the system a central element in the pre-analytical process.

The blood samples and other small clinical samples are transported from the departments directly to the bulk loader in the laboratory via Tempus600®. Here they are automatically processed in the fully automated laboratory equipment which handles 90% of the production in the laboratory.

The laboratory uses the response time as a way of measuring the automated laboratory system’s performance. Response time is measured every month. No distinction is made between the acute, accelerated and routine samples.

Hvidovre and Amager hospital share the same goals, so the results are comparable.

The laboratories’ response-time goals are:

TAT and ToTAT for hospitalised patients

In 2020, the TAT and the ToTAT were measured in the hospitals and the Outpatient Clinic.

“Different factors can affect the ToTAT, for example,  the laboratory staff do not always take the blood sample from the patient. Sometimes staff at the clinical departments do this and occasionally they choose to deliver the samples to the laboratory by porter instead of using Tempus600®. This affect the ToTAT in a negative way,” said Lisbeth Mortensen, Head of Department in the Clinical Biomedical Department at Amager and Hvidovre Hospital.

TAT and ToTAT for the Outpatient Clinic with Tempus600®

The TAT from the Outpatient Clinic at Hvidovre Hospital is very good and exceeds the goal and the ToTAT is better than the results from the hospitalised patients.

Only the bio-analysts working in the laboratory can influence the results for the Outpatient Clinic.

The laboratory measures the ToTAT for morning rounds on 250 patients. The goal is that 85% of the blood samples should be taken from the patients before 09:00 and 85% of the results should be available in the patient journal before 10:00.

The purple shows when the time at which blood tests are taken from the patients. On that particular day, 85% of the blood samples were taken before 09:00. The blue line shows that 85 % of the samples were received in the bulk loader before 10:00.

“This is the ideal result, which we aim for every day,” said Lisbeth Mortensen.

ToTAT from the morning round – Tempus600® system not active

The graph shown below shows how the ToTAT results were affected on a morning when the tube system was not active.

The purple line shows that on this particular day 85% of the blood samples were taken from patients by 08:45. The blue line shows that the samples were loaded in the bulk loader one hour later because the Tempus600® system was out of order. The red line shows that the delay affected the time it took before when the results are available in the patient journal in a negative way. On that particular day, the results are available in the patient journal by 10:45, which is a delay of 45 minutes.

“In order to reach our goals, it is important to transport the sample tubes to the laboratory in the Tempus600® systems. This way we can keep the ToTAT as low as possible. Therefore, we focus on getting the staff to use the Tempus600® system immediately after the blood has been drawn. Furthermore, any factors that can influence on the tubes, e.g. failure to use Rover (a PDA device used to scan the test tubes after sampling) causes the samples to be sorted out in the preanalytical unit and then handled manually, must be avoided,” said Lisbeth Mortensen.

From the very beginning. Hvidovre hospital’s vision was to have a Tempus600® system installed in every hospital department and to connect the pipelines from all the departments with acute patients directly to a bulk loader in the laboratory.

Soon, when the new acute hospital building is ready, the hospital will install an additional five new Tempus600® Vita in the building. In order to fulfil the vision, the laboratory must invest in one more bulk loader and one more PVT-system.