Homerton University Hospital NHS Foundation Trust has followed up on their first successful experiences with TEMPUS600 solution by installing the second TEMPUS600 system. 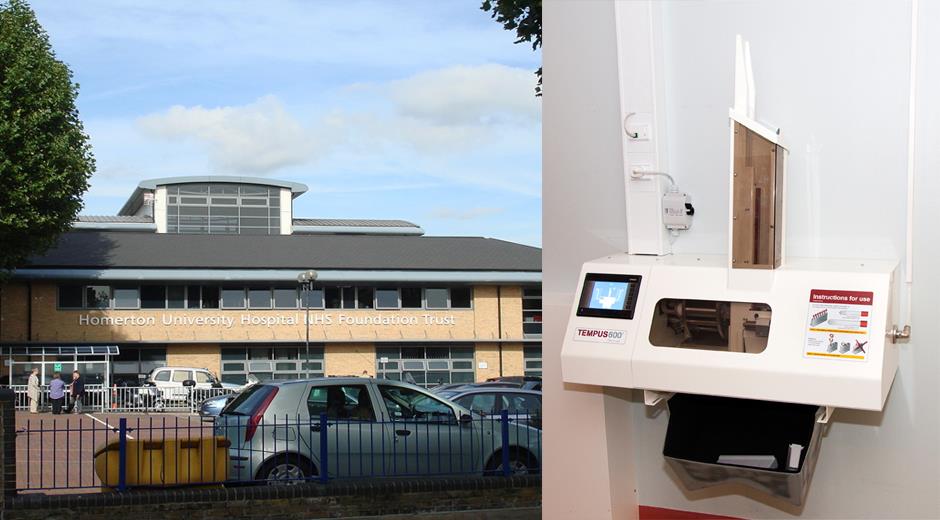 Homerton University Hospital NHS Foundation Trust, based in the London Borough of Hackney, has followed up on their first successful experiences with TEMPUS600 TA system by installing the second TEMPUS600 TA solution in Accident and Emergency (A&E).

Due to ongoing issues with continued use of an aging PTS and the recent success of the Tempus line into Clinical Biochemistry the hospital management decided to implement a further TEMPUS600 TA linking into Haematology and Blood Transfusion. The new system is expected to help improve turnaround times for FBC, coagulation and other Haematology testing required by A&E.

The first TEMPUS600 TA was installed in February 2015, going live in March once staff training was complete, and has been running successfully ever since.

Since the introduction at the hospital the TEMPUS600 transport system (the first installation in the UK) has had a considerable impact on laboratory turnaround times which, in turn, has had a positive effect in A&E.

“The A&E department holds weekly meetings to discuss breaches of the four-hour patient turnaround time target. When samples were transferred to the laboratory via the PTS system, diagnostic delays were frequently cited as a contributory cause of the breaches. By comparison, the direct line provided by the TEMPUS600 has eliminated the delays due to sample transport, totally transforming laboratory turnaround times. Since the system went live, the incidence of patients breaching the four-hour waiting time in A&E due to diagnostic delays within pathology has become almost non-existent, which is quite an achievement.” Angus Wyatt, Chemical Pathology Laboratory Manager at Homerton University Hospital, explains.

Several factors such as logistics, sample transfer, implementation and workflow were considered before the hospital management finally decided that the TEMPUS600 TA was the right solution to accomplish the job.